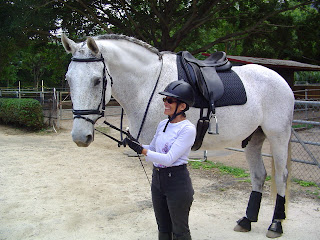 I'd like to tell you about my horse Zeus.  He is  magnificent.  I found him in California from Blue Fountain Farms.  He was two years old.  When I met him, I knew right away he was to be my teacher.  He flew from California to Hawaii to get to his new home.  He traveled like a champion.  He was 16.2H at the age of two and growing fast.  Over the next 10 years, I have been on an amazing journey with him.  He is now 13 years old and stands 19H high.

Standing in his presence is awe inspiring.  He is extremely sensitive and very psychic.  I started him and trained him up to third level Dressage.  Each step of the way has been and still is educational.  I had to learn to ride his large gaits without interfering with what he does naturally.  Having never ridden a horse this large and I am only 5'1", the first time I sat on him and asked for a walk was overwhelming.  I had to remind myself, he is only walking, just let him walk forward, naturally and ride it.  All went well and we were eventually flying everywhere.  Five of his strides is equal to about ten of a 15H horse.  Not only is the stride bigger, every aspect of his care and training is dramatically different than handling a smaller horse. I had to learn to walk big when leading him so I could stay with him.

Riding large horses well is an education in itself . I have seen too many of these gorgeous animals choked up in their gaits because the rider is intimidated by the movement and can't ride it.  I can fully understand how this can happen.  It is the rider's responsibility to learn to ride them properly.  The best way I can explain the difference is think of driving an 18 wheeler semi truck and what it takes to stop that truck and maneuver it safely versus driving a small compact car.  The compact car you can turn and stop on a dime, but you will not do that with a semi.   Riding a 19h horse is like driving a semi.  Everything you do has to be planned ahead to give them time to shorten up their gait so they can halt or do what you are asking for.  You must prepare them a few strides earlier than what you would have to do with a smaller horse.

Not only has Zeus taught me how to ride him and improved my skills exponentially, but he has shown me what  it takes to keep horses sound and healthy.   At age 8, our training came to a halt with an unexplained hind end lameness.  It started at around the age of 5 when I begin to feel something very, very subtle in his gait on the right side.  Having him thoroughly checked, nothing was found. As time went on, the problem became more pronounced.   I was devastated.   My partner and friend could no longer carry me. 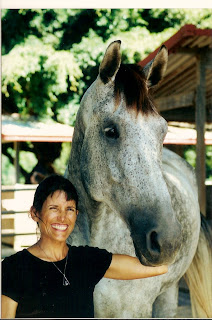 Over the course of the next five years, he had at least a dozen veterinarians examine him.   None of them had any answers and just shook their head.

Most of his life he has been barefoot but when he was four years old a farrier convinced me to put shoes on him. Trusting his expertise I had him shod for about two years with this farrier.  It was then when I saw a dramatic change in the shape of his feet.  They had become narrow, constricted and upright.  I had the shoes taken off.  I consulted at least a dozen farriers and none of them saw any problem with them yet I knew they were not right and when I would point out the areas of concern they agreed but did make the corrections.  His left front had a very high heel and looked like a club foot yet he was not clubfooted.

It wasn't until I met Susanella Noble, a holistic lameness specialist from the Big Island did the full picture of his problem show itself to me.  Everything she said made sense and I began to understand how the change in his front feet resulted in his back and hind end problems by causing the misalignment of his shoulders and traveling down the spine to the pelvic.

We are currently working to reshape his feet and allow the frog and contracted heels to expand.  It has about another year of growing and reshaping but the results so far have been very positive and for the first time in five years he is showing improvement.  I am optimistic and perhaps one day in the future I will be able to ride him once again. 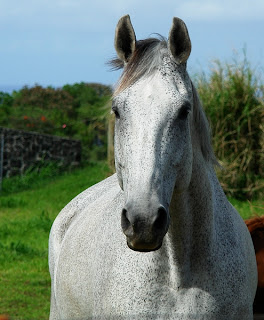 Posted by wingedwolf at 8:48 PM

wingedwolf
Horses are my passion. I have been involved with all aspects of their care and training for over 30 years. The wisdom gained from those years of experience and devotion is what I bring to you.